The Emerson, Lake and Palmer tribute band Noddy’s Puncture was the brainchild of keyboard wizard Tom Szakaly. He formed the band from the ashes of cult rock band Shanghai. Tom had decided to forge a band, which would fulfil his own musical ambitions and encompass his love of the music of ELP. Together with Adey McDermott on drums and vocals and Mark Conroy on bass and vocals his band came to fruition and they gradually gained a following playing ELP material together with other rock classics.

The reason for this was that neither Adey or Mark were die-hard ELP fanatics like Tom – so the band also had to play numbers that they suggested to keep them happy. Tom didn’t mind however, as they made their own arrangements and being a three piece, Tom also got to emulating guitar sounds and solo’s playing tracks like ‘Wishing Well’ by Free and ‘Beethoven’s 9th’ by Rainbow. Over the coming years the band progressed and earned a reputation amongst many ELP fans and as this reputation grew so did Tom’s keyboard pyrotechnics…

At their appearance at the 25th Anniversary Convention in Birmingham in 1995 Noddy’s Puncture played a storming set, with a review from the ELP fanzine Impressions writing “Tom Szakaly strode the stage like a colossus…” but as the band’s reputation was growing so were internal wranglings, eventually resulting in Adey and Mark leaving the band.

The next line-up saw the return of Lez Piszkalo on drums from the aforemetioned Shanghai along with bassist and vocalist Tony Gunderson who Tom knew of from the local music scene. This line-up lasted a mere two years before again, problems of a different nature forced Noddy’s to look for a new bassist.

So Lez and Tom together sought the assistance of old (school) friend and mutual musical acquaintance (from the earlier Shanghai days) Tony Hallsworth. Tony stayed with the band for about a year and a half before Lez announced his desire to play different material. There was even talk of resurrecting old Shanghai numbers, but not wanting to change the bands direction (it was after all supposed to be an ELP tribute band!) Tom decided he’d be better off with actual ELP fans as fellow band members. The search was on….

In desperation Tom even contacted members of ELP and there were offers of help which Tom really appreciates (thanks Keith…;~)

Having trawled the internet, “Googling” various ideas for quite some time Tom stumbled upon the personal website of drummer Steve Roberts who cited Carl Palmer (and ELP) as one of his main influences. Tom got in touch and even though Steve was from Cardiff a meeting was arranged and a weekend of jamming (and beer…) was arranged. Tom reckoned that a distant drummer who was an ELP fan was going to be preferable to a local one who was not. And he was right, Steve proved to be just what the band needed to finally put together a true ELP tribute performance…!

So Noddy’s now had the ideal drummer… but what about a bassist…?

Before too long a local bassist emailed Tom as he’d seen it mentioned on the internet (the ELP digest amongst others) that Noddy’s Puncture wasn’t only flat at the bottom. Tom suggested a get together and so it was that Phil Blakeney (notice the ‘lake’ in the surname) and drummer Steve Roberts from Wales (which as Emo once said: “has produced many things”…!) got together with Tom and kept the ELP flag flying…. for a while at least.

It was with this line-up that played the yearly August bank holiday week end at the ‘Six Bells’ in 2005 when, on the second night none other than Keith Emerson himself came along and joined in for a large part of the bands set. He also very kindly allowed Noddy’s to release a live CD from the night. Needless to say that this release heavily features Mr.Emerson (aka “The Masked Man”) and is available now. Please see the Audio page for some sampler downloads.

Some time later Phil Blakeney had to leave the band due to personal commitments and the search was on for yet another bassist. As Tom definitely wanted to keep to his decision of ELP fan band members only… this could be a problem.

It was during a visit from a friend that Tom’s mother asked him why he didn’t have a go…? So the next line-up saw Kevin Colon on bass and vocals and as he was also a huge NICE fan, he suggested that the band started to perform more NICE numbers. ‘Country Pie’ and the first part of ‘Pathetique’ were added to the set and work also began on ‘For Example’. Unfortunately, just as everything was looking promising (well musically at least… the vocals had been a weak point…) Kevin decided he wasn’t going to carry on.

This he announced just four weeks before a rather important and prestigious gig – a double-bill event in Marlborough with UK Genesis tribute G2. Something had to be done – and quickly!!

A chance meeting with the aforementioned Tony Hallsworth who had been guitarist in Shanghai and also an earlier line-up of Noddy’s Puncture saw him offering to help out and stand in to play the gig.

It was a very tall order but as he pointed out, he had already played some of the material years before. So the set was slightly re-configured and over the next three weeks Tom and Tony rehearsed constantly, even putting together a cut-down version of “Pictures At An Exhibition” Then after the Marlborough gig with G2 Noddy’s Puncture were back to looking for a new bassist – an ELP fan who already knew the music. Word came that a friend of a friend of the bands long-time sound engineer Geoff, had a singer/guitar playing colleague who was interested. He was also an ELP fan. A meeting was arranged and rehearsals began.

Graham Seman was to be the bands bassist for the next three and a half years. With Graham, Noddy’s Puncture added complete versions of both “Pictures” and “Tarkus” to the set and more NICE material was also introduced. ‘Hang On To A Dream’ was added to ‘Country Pie’, ‘America’, ‘Pathetique’ and ‘Rondo’

Three and a half years is quite a long time… but yet again the gremlins were to strike. Graham announced he wouldn’t carry on flying the ELP flag (for whatever reason…) so after one final gig at the Kings Hall in Ilkley, West Yorkshire Noddy’s Puncture were yet again looking for a new bassist.

The internet came to the rescue, as it had done previously… and towards the end of 2011 Tom received an email from Ed Blaney saying that he had seen our website, read about our plight and would be interested in having a go. He already had his own tribute to David Bowie – Ultimate Bowie – in which he was the front man and also played guitar. This was a breath of fresh air as far as Tom was concerned… to have someone who was ready made “gig-savvy” would be a God send! A get together was quickly arranged and Tom even went to one of Ed’s Bowie tribute concerts to see him perform.

“Onward and upward”… so things were definitely improving. Ed would need to start playing bass… and as Greg Lake was also a guitarist first and bassist second, there was no problem there. The only issue Tom could see was that Ed lived so far away… in Newcastle. OK, Lee Jackson hails from the same place but the distance meant regular rehearsing might prove too much travelling wise as it’s nearly a four hour round trip for Ed..! Initially he made the trip for two or three rehearsals but then Tom began looking into ‘technology’ and the possibility of rehearsing over the internet. Before too long both Ed and Tom had signed up to ‘eJamming’ online rehearsal site – but sadly that has now closed down. So they now use another programme called ‘Jamulus’. Frank has also now joined Ed and Tom for the internet rehearsals.

They all now regularly get together on-line to work out numbers and even practice full sections. It is definitely not the same as being in the same room but it means pieces can be perfected and practiced anytime they choose, and then rehearsed properly once a full band session is arranged.

So to sum up… a review of Noddy’s Puncture in Impressions magazine wrote as follows: “If you live in the UK then this is a must, it is possibly the closest you will get to see a live ELP performance” 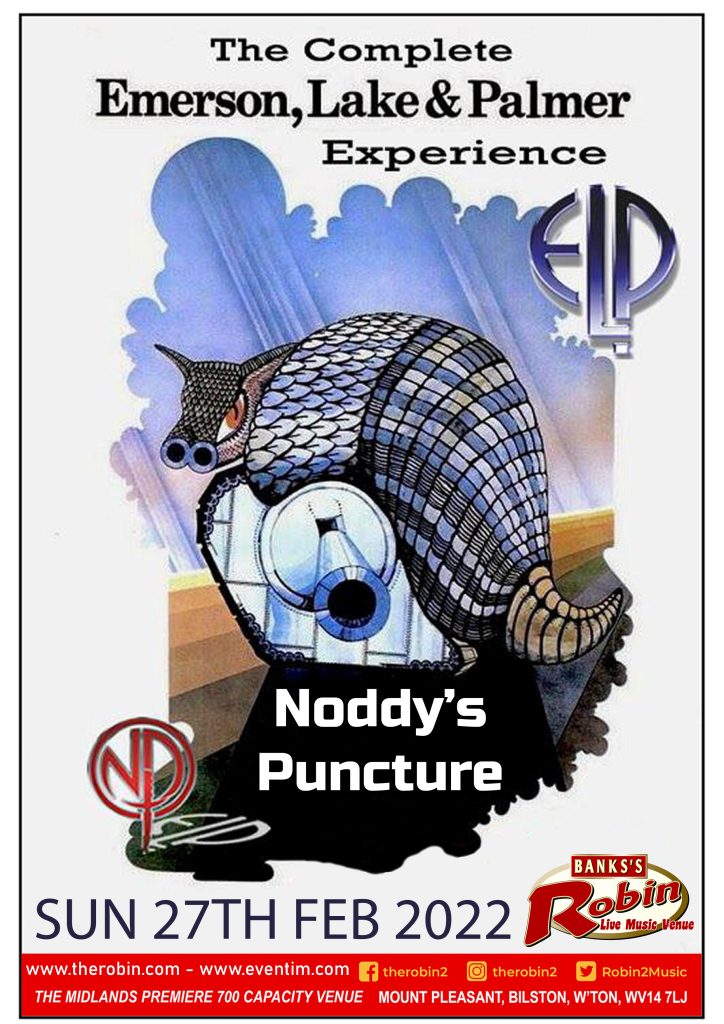